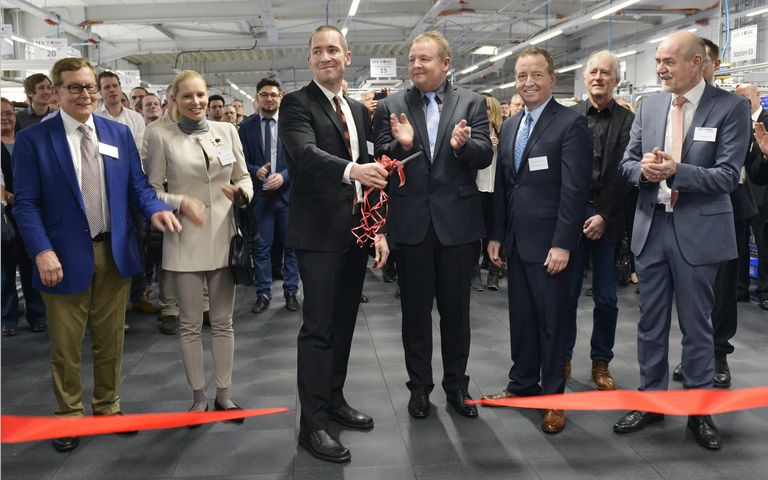 On February 20th 2017, HYTORC Technologies officially inaugurated its new location in Sprockhövel with a huge celebration. Numerous guests from home and abroad were welcomed at the event by managers Klaus Wimmers and Thomas Heitmann among them many European HYTORC clients, representatives of the American holding company HYTORC UNEX CORPORATION, the mayor Ulli Winkelmann, Sprockhövel’s deputy mayor Volker Hoven, Ingrid Döbbelin from the civic business development and the former owning family Rinke, who have built the building on Kleinbeck Street back in the 1970s.

During their welcoming speeches, the managers pointed to the expansion possibilities the new building offers. It has been the right move to leave the constricted conditions of the old location.

Further speeches were held by Volker Hoven and the Chief Operating Office of HYTORC UNEX CORPORATION, Jason Junkers. Dr Harald Rinke didn’t want to miss the chance of telling interesting facts about the origins of the building. Under the eyes of the 92 employees and guests, Jason Junkers cut the symbolic red band in the assembly hall. During the following tour of the site, the guests were clearly impressed by the modern production facility. Currently the HYTORC employees assemble and test hydraulic and pneumatic pumps on a production line that has been constructed and assembled by the employees of the company themselves. In order to expand the in-house production depth, an additional production line is to be put into operation in the near future.

The clear growth strategy will allow for further hiring of additional staff in the future. The company keeping its location in Sprockhövel is good news for the entire region.